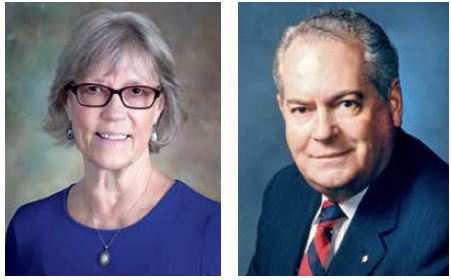 Synchronicity: The simultaneous occurrence of events that appear significantly related, but have no discernible causal connection. Follow Suzanne Ward’s, MN ’85, ties to UCLA, and the recent establishing of The Suzanne F. Ward & Paul H. Ward Fellowship in the School of Nursing and one can’t help but think of, well, synchronicity.

A job interview first brought Suzanne to UCLA. “The minute I stepped on campus, I felt I was home.” Shortly after landing an administrative nurse position in UCLA’s main operating room, Suzanne started an in-house, perioperative educational program for nurses. Thus began years of collaborating with UCLA Nursing School. “There was a camaraderie and esprit de corps between service and education,” Suzanne recalls of the union. “We just meshed.” Meshed they did, with Suzanne earning her masters in nursing administration there and eventually coming onboard as an assistant clinical professor.

UCLA is also responsible for introducing Suzanne to her late husband, Paul H. Ward, MD. As UCLA’s Professor and Chief of the Division of Head and Neck Surgery, Paul’s history with the university spanned from 1968 to 1991. He and Suzanne met while working side-by-side in the operating room. “We became friends and one thing led to another.”

New experiences called to Suzanne, leading to her departure from UCLA. During this time, a women’s retreat in Hawaii proved transformational. She began to see spirituality’s impact on healing. “It was profound,” she says. “I found my calling.”

This new path led Suzanne to the University of Santa Monica, where she earned a masters in spiritual psychology and completed post-graduate work in consciousness, health and healing. After Paul’s death in 2015, Suzanne became a licensed spiritual practitioner at her Spiritual Center with her ministry focus on grief counseling for people who were actively dying and their families. Currently, she is completing chaplaincy education through the Institute of Clinical Pastoral Training which will lead to her certification as a Chaplain.

A new milestone occurred when considering Paul’s wish to give financial support to UCLA School of Nursing. When considering the focus of The Suzanne F. Ward & Paul H. Ward Fellowship, part of the Chancellor’s Centennial Scholars matching program, Suzanne had an epiphany. “Spiritual care is a powerful tool people don’t understand yet.” With that in mind, the fellowship will support UCLA students participating in the Doctor of Philosophy (PhD) program, Doctor of Nursing Practice (DNP) program or Advanced Practice Nurse Practitioner (APRN) program with a research bent on spiritual care, end-of-life/grief recovery and healing interventions. Suzanne explains, “We need great thinkers who care about looking at patient outcomes based on spiritual care.” And just like that, Suzanne’s calling led her back “home.”